Although the focus of the NZBC is largely within New Zealand, sometimes the severity of a situation demands that we respond, and the persecution of the Rohingya people by the Myanmar military is one of these. In September our Chairperson Amala Wrightson attended a rally to draw attention to the crisis and stand with local Rohingya and other Muslims, and more recently Ajahn Chandako, the Abbot of Vimutti Monastery near Auckland, spoke at a gathering of Rohingya and Burmese Buddhists and sent the following report:

END_OF_DOCUMENT_TOKEN_TO_BE_REPLACED

Come along and join us as Auckland’s diverse faith groups open their doors to introduce us to their faith and ways of worship!

Visit the houses of worship at the times listed below – but please also check the “Sacred Spaces 2017” page on the Auckland Interfaith Council website for updates.

END_OF_DOCUMENT_TOKEN_TO_BE_REPLACED

This year, over 20 monks and nuns from diverse Buddhist communities in the Auckland region communities have been enjoying the opportunity to improve their English and meet each other. The monastics are based at temples and small centres around the Auckland region, and connected with immigrant communities from places such as Sri Lanka, Burma, Thailand, Laos, Cambodia, Vietnam and Taiwan. Rukman Wagachchi from the Buddhist Council organised the classes, which were held at the Srilankaramaya temple in Otahuhu. 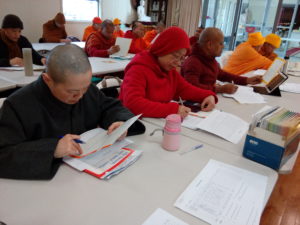 The Level One English class was free for learners with Permanent Residency (12 participants had PR and 17 participants did not). Classes ran two days a week, Tuesdays & Thursdays for half a day each week from April to August 2017. Tutors from the Manukau Institute of Technology taught the course, and they were briefed about how to treat the monastics respectfully.
END_OF_DOCUMENT_TOKEN_TO_BE_REPLACED

END_OF_DOCUMENT_TOKEN_TO_BE_REPLACED

New Zealand has a high rate of suicides. UK-based psychologist John Henden recently visited New Zealand to teach strategies for working with people at risk of killing themselves. He also wrote this article. In Hastings this August, he taught a One Day Intensive Workshop, with 120 people attending.

John Henden has 30 years’ experience in the field, in different intervention centres with different degrees of success. He and others in this area of work have identified basic ways to rapidly build rapport, engage empathically with people, then use specific question techniques to help turn their minds away from considering suicide and into considering other ways of ending their suffering.

END_OF_DOCUMENT_TOKEN_TO_BE_REPLACED

This new website enables the Buddhist Council to update content more quickly, and to provide the Buddhist Council’s aims in different languages. The WordPress site has been developed thanks to many hours of work by Executive Committee assistants Pimmy Takdhada and Robert Hunt, with valuable advice from Tim Wylie in Auckland.

The trustees of Buddhist temples and centres need to understand the new Health and Safety Act. END_OF_DOCUMENT_TOKEN_TO_BE_REPLACED

All registered charities must understand and adopt the new reporting standards. This is important for any Buddhist temples and organisations that are registered as charities in New Zealand. END_OF_DOCUMENT_TOKEN_TO_BE_REPLACED

Buddhist temples and centres can apply for an exemption from paying certain portions of their local authority rates. Churches and other places of worship or religious education are “non-rateable” (under Section 8 of the Local Government Rating Act, part 1 section 9). END_OF_DOCUMENT_TOKEN_TO_BE_REPLACED