All photographs by Angie Ong

The weather on the day of the Peace Walk in Auckland began with steady and at times heavy rain. Despite this, at least sixty people attended, coming from as far south as Christchurch and as far north as Dargaville. At Cornwall Park we assembled in the shelter of the Band Rotunda, sharing it for a time with a large group of runners starting a marathon. 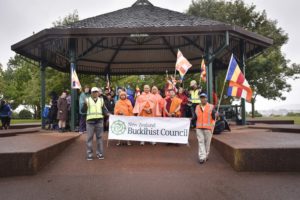 Ven. Amala gave a brief talk, pointing out that tangata whenua would see the rain as a sign of blessing (perhaps by local nagas?), and that if we consider the walk as a pilgrimage then hardship is to be expected and welcomed. She said that the main purpose of the walk was to express gratitude for our having encountered the Buddhadharma in this lifetime, and for being able to practice it freely in Aotearoa.

The first stop on our walk was Tsi Ming temple. Due to the heavy rain we did not attempt to make the outdoor incense offerings, but stopped for a photo.

The rain continued as we walked through Ellerslie to Pu Shien temple, where we were warmly welcomed and given slippers to replace sodden shoes and towels to dry off wet clothing, 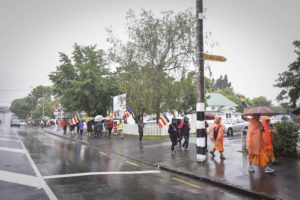 before proceeding upstairs to sit in the Buddha Hall. Incense sticks were lit and distributed to everyone, and then Master Chang Lin told us a bit about the temple, which is in the Pure Land tradition, and answered questions. Then she and Ven. Chang Shien chanted the Heart Sutra in Chinese and incense offerings were made on behalf of everyone present. We then had a chance to chat over a cup of tea before heading off, refreshed and warmed up, on the next leg of our walk.

By the time we left Pu Shien temple, the rain had eased, and our next stop was Soka Gakkai (SGINZ), where we were welcomed by members of their executive committee from around NZ, who were there for their monthly planning meeting. In their auditorium we watched a short video about SGI, before a question and answer session. They opened the doors of the altar so that we could view the scroll which contains the mantra Nam Myoho Renge Kyo that they chant in homage to the Lotus Sutra. Further refreshments were offered there. It was fine enough for a photo to be taken outside the building.

We walked onward to Mt Wellington. As our procession went along the Ellerslie-Panmure Highway bearing Buddhist flags, and the NZBC banner, occasionally passing cars honked their horns in greeting.

Arriving at our final stop, the Auckland Buddhist Vihara, the walkers were treated to a delicious lunch prepared by the Auckland Theravada Buddhist Association. Ajahn Chandako then gave a talk about the roots that are common to all Buddhist traditions: the Buddha’s enlightenment under the Bodhi Tree and his first teaching of the Four Noble Truths and the Noble Eightfold Path. As Ajahn said,

After that, we launched the Buddhist Council’s tenth anniversary booklet, and copies were distributed, along with mala beads.

The rain poured down again as we faced and paid respects to the Vihara’s Bodhi Tree, the largest in Aotearoa. Ajahn Chandako and other monks then chanted blessings and dedicated merit.