The multi-tradition Christchurch event acknowledging ten years of work by New Zealand Buddhist Council was well supported and widely attended.   Meditators were invited to a two part event.  It began with mindful walking in a natural setting.  That was followed by silent seated meditation in a Buddhist temple.

The purpose was to  bring attendees attention to peace – inner and outer.  The event organisers suggested this with the words “attending to our aspirations for inner peace, kindness and wisdom”.    In the words of one of the walkers “It was refreshing.  I could walk with others paying simple attention to the moment, and then we had the chance to dedicate our goodwill to others”.

Most of the communities undertaking Buddhist practice in Christchurch responded with enthusiasm. Their leaders and supporters joined the morning’s walk and subsequent meeting.  Some contributed passages of wisdom, many shared blessing through gatha and sutta, and practiced sincerely together.  There were also visitors from other parts of New Zealand  Some came from Auckland and some from even further afield with two Venerables from Santipada Monastery in the Bay of Islands.

For part one, the mindful  peace walk was in Christchurch Botanic Gardens. The route taken was from Central Lawn near the Rose Garden, along the banks of the Avon, eventually crossing at the West Bridge and finishing with time at the Mani Stones in the Pinetum.   One of these stones, carved with the Chenrezig Mantra was dedicated by His Holiness the Dalai Lama in 1992.  The other, with the Amitabha Mantra was dedicated by New Zealand born, Pongre Rinpoche. 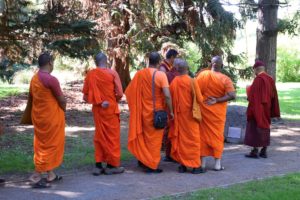 The gentle springtime natural environment was particularly conducive for the meditative walking. The weather was fine with mild temperatures.

The event began with a Karakia offered by Matiu Payne of Kai Tahu.  Welcome and guidance was given by Christchurch Liaison person of NZBC, Jane Ross (Diamond Sangha Zen Group).   The NZBC message to the event from Ven. Amala Wrightson, chairperson of NZ Buddhist Council was read by Sally McAra (Communications Executive Member).

Fo Guang Shan Temple, nearby at the corner of Riccarton Road and Harakeke Street, kindly provided a peaceful environment for the Meditation meeting.

The meditation introduction was offered by Brendan Sillifant (Christchurch Community of Mindful Living), the  programme following the silent sitting with dedications of merit was 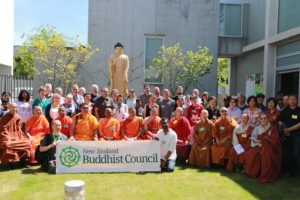 facilitated by Robert Hunt (Wat Buddha Samakhee).  Chanting to dedicate the merit of the practice was offered from four different traditions – Tibetan, Pali, Korean and Chinese.   Excerpts from Karaniya Metta Sutta were read in English.

After a socialising period of time, lunch followed. The organisers had obtained professional catering services from Fo Guang Shan’s Water Drop Cafe for tasteful vegetarian meals for Venerables and other invited leaders.  On the day those who contributed dana for the meals of the twelve Venerables present were able to partake in offering the meals to the Bhikkhu and Bhikkhuni tables. 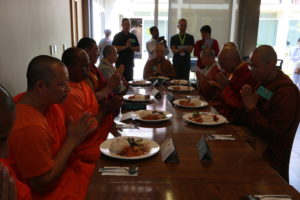 Photography contributions on this page from: Rukman Wagachchi, Mike Reid and John Herrett.